Team India completed a memorable whitewash in the recently-concluded T20I series against New Zealand following which the players have witnessed a significant rise in the ICC T20I rankings. KL Rahul, who was the man of the series in the T20Is, has jumped to the second spot. Having scored 224 runs from 5 matches, he now has 823 points to his name. Pakistan’s Babar Azam leads the T20I batting rankings with 879 points. Rahul registered scores of 56, 57 not out, 27, 39 and 45 in the five matches. 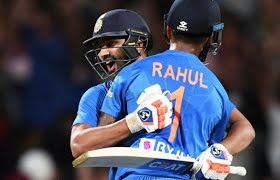 With two fifties in the T20I series, the injured Rohit Sharma has entered the top 10. The Indian opener has 662 points to his name. Rohit’s entry means India now have three players in the Top 10 of the batting rankings. Indian captain Virat Kohli remains at number 9 with 673 points. Aaron Finch, Colin Munro, Glenn Maxwell and Evin Lewis are the other prominent names in the top 10 batting rankings.

Among Indian bowlers, comeback man Jasprit Bumrah has jumped 26 places to number 11. He is the top-ranked Indian bowler in the ICC rankings. Among other gainers, Yuzvendra Chahal has moved up 10 places to 30th, Shardul Thakur has risen 34 places to 57th rank, and Navdeep Saini 25 places to 71st. Afghanistan’s spin duo of Rashid Khan and Mujeeb ur Rahman at the top of the bowling rankings.

Coming back to India, they would be buoyed by the brilliant performance in New Zealand where they won all five games in the T20Is. India won two matches, at Hamilton and Wellington, in the Super Over after both the matches were tied. In final T20I as well, they came from behind to win the contest by seven runs and complete a clean sweep.

India will now take on the Kiwis in a three-match ODI series that starts on Wednesday in Hamilton. The other two games will be held in Auckland and Mount Maunganui. The one-dayers will be followed by Tests. The first one begins on February 21 in Wellington and the second at Christchurch from February 29. India were dealt a big blow on Monday as in-form opener Rohit Sharma was ruled out of the remainder of the tour with a calf injury.