An overwhelmingly confident New Zealand will take on a dazed Bangladesh in an inconsequential Group 2 clash at the Eden Gardens in Kolkata on Saturday. Having beaten India and Australia in close games

An overwhelmingly confident New Zealand will take on a dazed Bangladesh in an inconsequential Group 2 clash at the Eden Gardens in Kolkata on Saturday. Having beaten India and Australia in close games, the Kiwis assured themselves of a semi-final berth with a convincing triumph over Pakistan in their previous contest. Although they have progressed to the next round, New Zealand will be keen to carry on the winning momentum, and finish unbeaten in Group 2. For their opponents Bangladesh, the biggest challenge would be to lift themselves after the heartbreak against India. They had lost the previous two matches as well, against Pakistan and Australia. But, the defeat to India would have hurt most, since it was a game they should have won.

Even though New Zealand will be favourites to win at Eden Gardens on current form, they cannot take Bangladesh lightly. The Kiwis were excellent with the reading of their conditions in the first two matches, while against Pakistan, their batting prowess finally came to the fore. Aggressive opener Martin Guptill played a brilliant knock against Shahid Afridi's men and, almost singlehandedly took them to a match-winning total. When Guptill gets it right, he more often than not puts the team in a winning position. Towards the end, Ross Taylor also came to the party with a quick cameo, which enabled New Zealand to finish on a high.

Intriguingly, the Kiwis head into the final league match with neither of their spearheads, Tim Southee and Trent Boult, having played a single match. They haven't needed to for the spinners Ish Sodhi and Mitchell Santner have gone as excellent job while the pace department has been adeptly handled by Mitchell McClenaghan, Adam Milne, with commendable support from Grant Elliott. It remains to be seen whether Southee and Boult get a look in with the semis fast approaching. While there are not many issues ailing the Kiwis, they will definitely want to see more runs from the willows of Kane Williamson and Colin Munro.

Following their heartbreaking loss to India, Bangladesh have gone out of contention for a spot in the semi-finals. Even a close win could have given them a mathematical chance of staying alive. But, Bangladesh have only themselves to blame for the defeat to India. After dominating for a majority of the game, they gave the match away to India on a platter as two of their experienced men Mushfiqur Rahim and Mahmudullah floundered under pressure hitting the ball straight to the fielder. The dismissal of Mahmudullah was particularly disappointing for he had just seen Rahim fall, and attempted the same stroke next ball. They will need to display tremendous gumption to recover from the horror. 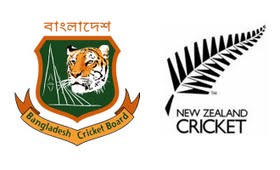 If they manage to put away the disappointment of losing, there were actually plenty of positives Bangladesh can take into their final clash against New Zealand. Their bowlers pitched the ball in perfect areas, never allowing Indian batsmen to dominate. Mustafizur Rahman, Al-Amin Hossain and skipper Mashrafe Mortaza himself, all delivered, and while not all of them were rewarded with wickets, they ensured the pressure stayed on India. Shakib Al Hasan was equally good in the spin department, maintained a tight leash on the Indian batsmen. If only they manage to keep their cool in tense situations, a lot more results will go Bangladesh's way.