KKR-Perth Contest washed out at Durban

The Group A clash between Kolkata Knight Riders and Perth Scorchers ended in a damp squib at Durban because of a thunderstorm.

The Group A clash between Kolkata Knight Riders and Perth Scorchers ended in a damp squib at Durban because of a thunderstorm. Just the 14 overs of action was possible in which Perth got to 91 for 2 before rain hit the stadium. Opener Shaun Marsh scored 38 (from 40 balls) while Simon Katich was batting nicely on 43 (from 32 balls with 4 fours) before the rain interruption.

Both the sides shared a point each and this meant that the Kolkata Knight Riders have virtually no chance of making it to the Semi Finals with two defeat and a ‘no result’. 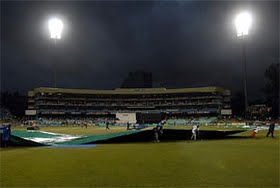 Toss and Teams Update: Kolkata Knight Riders have won the toss and asked Perth Scorchers to bat first in the Group A Match at Durban. KKR led by Gautam Gambhir are on the edge of getting knocked out having suffered two heavy defeats. The defending IPL Champions have made two changes with Brett Lee and Debabrata Das replacing Shakib Al Hasan and Rajat Bhatia. Perth Scorchers play their second match of the tournament. Their opening match was against Titans which they lost and have made one change to their line-up with Counter-Nile replacing Edmondson.