Review: Team India have only themselves to blame for WT20 exit

MS Dhoni's Team India went into the 2016 World T20 at home as firm favourites to lift the trophy.

MS Dhoni's Team India went into the 2016 World T20 at home as firm favourites to lift the trophy. But, in the end, they could only make it as far as the semi-final, which would definitely be seen as an underachievement. When the tournament began there was no perceptible weakness in the side. But, in their very first match they were humbled by New Zealand. Considering the group they were placed in, this was a massive blow for India early in the tournament. They huffed and puffed through the rest of the tournament, and somewhat managed to make it to the semis, without hardly ever looking convincing, expected of a team of world beaters. 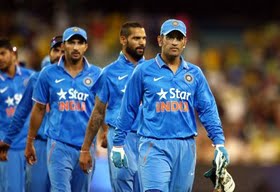 In the semi-finals, they came up against an unpredictable West Indies outfit, who had been embarrassed by Afghanistan in their final group game. The way the match progressed, one can only say that West Indies possessed the brute force to muscle India out of the tournament. But, a critical analysis of the team would lead one to the conclusion that India have only themselves to blame. You cannot afford to bowl no-balls in T20s. India bowled two, and both times wickets were claimed of those balls. The beneficiary on both occasions was Lendl Simmons. West Indies were in serious trouble when he came in, but he made India pay for their generosity, and dumped the much-fancied hosts out of the mega event.

Even though Indian fans would be disheartened with the team bowing out before the final, the fact is that India did not play well enough to make it to the finals. A fair assessment would be that India were lucky to even make the final four. They were almost singlehandedly taken into the semis by Virat Kohli. He played a brilliant innings in match against Pakistan after India found themselves in early trouble, and then rescued India from a situation against Australia where defeat seemed a straightforward result. In the previous match against Bangladesh as well, it was the luck factor that got them through. Without Kohli's massive contribution and the luck factor, India would have been out in round one.

There were a lot of factors that culminated in India's poor show at the World T20. Lack of runs from the openers was definitely one of the key reasons. Rohit Sharma and Shikhar Dhawan went into the tournament in great form, following the success in Australia and in the Asia Cup. But, in the tournament that mattered the most, they came a cropper. In conditions where they should have excelled, they were undone by smart bowlers, who exposed their weaknesses. Rohit had a chance to make amends in the semis on his home ground. And, while he batted well, India needed more from him in terms to runs. Dhawan had a completely forgettle run, and had to be replaced by Ajinkya Rahane for the semis.

India also realised the importance of Yuvraj Singh in the team, as in his absence, MS Dhoni had no one to go as the bowlers were taken to the cleaners. Apart from his sensible batting, Yuvraj also has the knack of claiming big wickets, as he did in the do-or-die clash against Australia. Also, Suresh Raina, who was dropped from the ODI side earlier, will now face further backlash after failing to come good in the T20 format, which is like bread and butter to him. While it will be unfair to be too critical of the bowlers, Ravichandran Ashwin and Ravindra Jadeja were found out at Mumbai, where there was no help for spinners. To be rated as world class spinners, they need to do better. At the end of the day, India's weaknesses stood exposed, and the better side made the final.