On a high having won five matches in a row, Kings XI Punjab would look to extend their resurgence when they take on Rajasthan Royals in the 50th match of IPL 2020 at Abu Dhabi on Friday. Thanks to their fightback in the second half, KXIP now find themselves at the fourth spot with 12 points from as many matches. Time is fast running out for RR with 10 points from 12 games. They need to win both their remaining games to be in play-offs contention.

KXIP will look for a good start from skipper KL Rahul. Although he remains the tournament’s top-scorer, he hasn’t done much of note in the last few games. Chris Gayle has been brilliant for KXIP with some typical smashing knocks. If Mayank Agarwal is available, it would be interesting to see what Punjab would do with Mandeep Singh, who hit a fine fifty against KKR.

In the bowling department, Mohammed Shami has been exceptional with the ball, and has received excellent support from Arshdeep Singh and Chris Jordan. Ravi Bishnoi and Murugan Ashwin have combined well to take care of the spin department while Glenn Maxwell has been resourceful with his off-spin.

Keeping their inconsistency aside, Royals stunned Mumbai Indians courtesy a roaring hundred from Ben Stokes. Opening the innings, his unbeaten 107 saw RR chase a difficult target with ease. The game also saw Sanju Samson getting back among runs. However, Jos Buttler and skipper Steve Smith will need to raise their game. 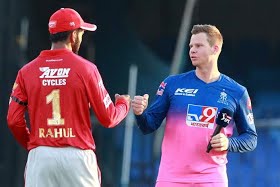 In the bowling, it has been a one-man show with Jofra Archer claiming 17 wickets from 12 matches at an economy of under 7. Kartik Tyagi and Ankit Rajpoot were taken apart in the last game. Shreyas Gopal and Rahul Tewatia have been reasonable in the spin department.

The pitch at Abu Dhabi has aided batsmen of late with teams constantly scoring in the region of 180-190. It will be a tricky decision after winning the toss.

The temperature is cooling down a bit. From the low 30s when the game starts, it will fall further.