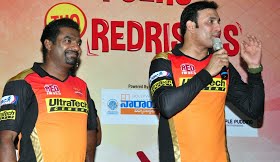 Former India cricketer VVS Laxman has hailed Sri Lanka’s spin bowling legend Muttiah Muralitharan, describing him as someone who troubled batsmen all over the world, irrespective of the conditions on offer. Muralitharan was named as the Greatest Of All Time (G.O.A.T) among bowlers by a 50-member jury put together by Star Sports. Murali beat fellow legends like Shane Warne, Dale Steyn and Glenn McGrath to win the honour.

Former India and New Zealand cricketers have expressed their unhappiness over the way the ICC has conducted the World Test Championship (WTC) final at the ...

We are pretty content with the players we have selected for WTC final: Kyle Jamieson

New Zealand pacer Kyle Jamieson has asserted that the Kiwis are pretty happy with the team combination for the World Test Championship (WTC) final against ...

“The players are in good space,” asserts India fielding coach R Sridhar after washout on Day 1 of WTC final

New Zealand captain Kane Williamson admitted that India are a very strong side and that they expect a tough contest from Virat Kohli’s men. After ...

Want to give my best whether people criticise me or not: Ajinkya Rahane

Team India vice-captain Ajinkya Rahane has stated that he is not bothered either by criticism over his form or his record in England. Rahane scored ...