Toss: Netherlands, who chose to field 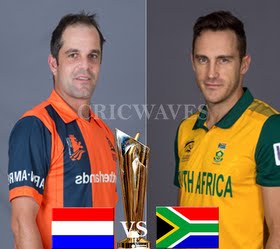 1.South Africa and Netherlands have never played a T20 match against one another but they have met in four ODIs The Dutch have lost all of them with the smallest margin separating the two sides a gulf of 83 runs.

2.There are three South African born players in the Dutch squad: Stephan Myburgh, Wesley Barresi and Eric Szwarczynski. Of those, Myburgh and Barresi played in the South African structures but Szwarcynski did not.